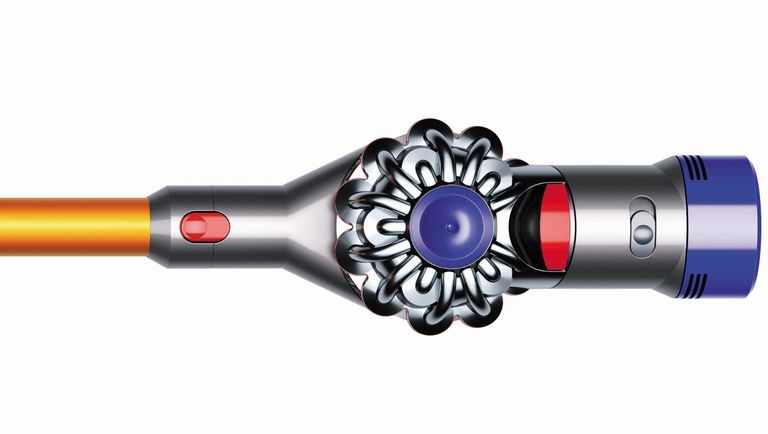 Cordless vacuums have already come of age in terms of their cleaning ability but – just like phones and laptops – their battery power has been limited. Not so with the V8.

If you’re considering a cord-free, lightweight vacuum cleaner, definitely take a look at the Dyson V8.  Probably more suitable for smaller homes, as the Nickel-Cobalt-Aluminium battery only lasts up to 40 minutes, or 25 with a motorised floor tool attached. However, with it’s 2 tier Radial cyclones technology and direct drive bristles that get deeper into the carpet, its cleaning performance is  very good.

SO WHY IS THE DYSON V8 SO GREAT?

1. IT’S GOT MUCH BETTER BATTERY LIFE

Aside from the motor, the major advance with the new Dyson V8 Absolute is the doubling of usable battery life – now 40 minutes instead of 20.

That’s enough to vacuum all but the largest homes, whereas you’d have to pace it around to clean decent-sized homes previously for fear of having to come back to the job later after a recharge.

A battery runtime indicator gives you a visual indication of cleaning time remaining.

Dyson has long extolled the virtues of its motors versus those of its competitors and having tested many of them, it’s clear that performance varies wildly. “Some cordless vacuum cleaners use small motors that can be weak, while others rely on heavy motors that can compromise versatility,” it says.

The V8 motor runs at 425W, compared to the previous generation V6 which ran at 350W. It spins up to 110,000rpm for powerful fade-free suction. It’s what Dyson has invested most money in developing over the last decade. The V8 is “the result of 18 months research and development and 500,000 hours of testing,” says James Dyson himself.

In 2016, Dyson says it will produce 8.8m digital motors – that’s approximately one every 3.5 seconds. 376 robots are used to assemble Dyson digital motors, as even the most dextrous human hand isn’t precise enough: the smallest manufacturing tolerance is +/- 3 microns, which is approximately a quarter of the thickness of a human hair.

The max mode offers higher suction for more difficult tasks, and is activated with a redesigned switch in the V8. It also now provides 115AW of suction, compared to a max of 100AW on previous generation machines.

The new V8 Absolute has a new bin emptying mechanism, called a hygienic dirt ejector. Put simply, this means you never have to touch the dirt as you bin it. As the bin is emptied, a rubber collar slides down the shroud (which itself was redesigned and now constructed from chemically-etched stainless steel, which has a smooth surface punctuated by approximately 15,000 holes measuring 0.4mm each), scraping dirt off. This drives out trapped dust and debris in a single action, with no need to touch the dirt, which you often do with other cleaners. The bin also has a larger capacity than the previous generation.

Ley components like the motor and battery are positioned near the hand to shift the centre of gravity and making the cleaning end of the vacuum much lighter. The overall weight isn’t different to the V6, so it’s just as manageable despite the new motor and other components like the larger bin.

Interesting fact: the polycarbonate clear bin is made from the same durable material as riot shields.

6. IT CAN CLEAN CARPETS AND HARD FLOORS

A direct-drive cleaner head removes ground-in dirt and pet hair from carpeted floors and is 150 percent more powerful than the equivalent V6 accessory, while a soft roller cleaner head can remove large debris and fine dust from hard floors.

All tools feature a new quick release catch enabling you to change smoothly between tasks.

As standard, the Dyson V8 Absolute vacuum includes the direct-drive cleaner head and the soft roller cleaner head, in addition to the mini motorised tool, the combination tool and the crevice tool.

7. IT’S GOT A CHARGING STATION

Many rival products have a charger you have to unravel and plug in, but the V8 has a charging station instead.

Up to 50 percent quieter, in fact. The air flow paths through the machine have been reworked, to reduce the noise associated with air moving fast through tight spaces. The post-motor filter has been redesigned, so it helps to muffle sound. And acoustic felt and closed cell foam inside the machine absorbs vibrations, also reducing noise.

This site uses cookies. By continuing to browse the site, you are agreeing to our use of cookies.

We may request cookies to be set on your device. We use cookies to let us know when you visit our websites, how you interact with us, to enrich your user experience, and to customize your relationship with our website.

Click on the different category headings to find out more. You can also change some of your preferences. Note that blocking some types of cookies may impact your experience on our websites and the services we are able to offer.

These cookies are strictly necessary to provide you with services available through our website and to use some of its features.

Because these cookies are strictly necessary to deliver the website, you cannot refuse them without impacting how our site functions. You can block or delete them by changing your browser settings and force blocking all cookies on this website.

These cookies collect information that is used either in aggregate form to help us understand how our website is being used or how effective our marketing campaigns are, or to help us customize our website and application for you in order to enhance your experience.

If you do not want that we track your visist to our site you can disable tracking in your browser here:

We also use different external services like Google Webfonts, Google Maps and external Video providers. Since these providers may collect personal data like your IP address we allow you to block them here. Please be aware that this might heavily reduce the functionality and appearance of our site. Changes will take effect once you reload the page.